‘If I was starting again and founding the SNP today, maybe I would call it something else but I’m not and it has been in existence now for 90 years and the problem here is not the name of the SNP, it is the absurd and irresponsible and unfounded comments by Sadiq Khan that are the problem here.’ Nicola Sturgeon, Scottish First Minister and leader of Scottish National Party, Interview with Holyrood magazine, 13 March 2017.

The nationalism that dare not speak its name

Nicola Sturgeon, SNP leader, recently expressed her frustration that her party’s name allowed it to be presented in a negative light.  She was not the first leader of her party to consider that the party’s name was unhelpful but felt that the problem was not so much the name but how her opponents chose to interpret it.  Labour is at least as nationalist as the SNP and the Conservatives far more so but both fail to appreciate or acknowledge their nationalism themselves.

A key to different understandings of nations, national identity and forms of nationalism rests on the thin nature of nationalist ideology and central to this is an understanding of the Other.  Leadership plays an important part in the definition of the Other.  Since becoming a Parliamentary party fifty years ago, the SNP has emphasized its multi-culturalism and sought to embrace the Other.  Having National in its name has made the SNP highly sensitive to the criticism and keeps them on a straight and narrow while other parties’ ideologies include a nationalism that dare not speak its name but has led to a framing of the Other in negative terms and allowed for the development of an absolutist, illimitable notion of statehood and citizenship.

The literature on nationalism is vast though it was rather neglected as a subject within the social sciences, especially as applied to advanced liberal democracies, until relatively recently.  With a few notable exceptions, nationalism was seen as a subject of relevance in new states, hence the emphasis on the study of nation-building in former colonies post-1945.  There was little appreciation that processes of nation-building were continuous, if not always acknowledged in all states.  It seems to be easier to see nationalism in opponents than in one’s own country or political party.

Little attention was paid to what Kellas (1991: 52) referred to as ‘official nationalism’ and others have referred to as ‘state nationalism’ as distinct from ‘regional nationalism, or some other variant, nationalism (see Keating 1988).  Indeed, it was (and remains) common to deny the existence of such a nationalism in the UK.  If we take official nationalism as an essential ingredient for the coherence of any state, as understood in work on nation building, then we can assume that denying its existence may be a sign of its strength and not its absence.  A coherent state requires a sense of belonging and loyalty.  Its leaders will often parade with military hardware, refer to hearts ‘pitter pattering’ when they see the national flag, prioritise fellow nationals over others, and make frequent references to pride in the nation/state and associated institutions.  Illustrative of this is the emerging bibliography of nationalism in the UK.  Numerous books and articles were written on sub-state nationalism with little reference to state nationalism when Scottish and Welsh nationalism were emerging as challenges to the UK’s integrity.  The more recent emergence of a literature on English and British nationalism, noting that British is not entirely accurate as it does not cover the whole of the UK, is not a sign of health.  The nation that need not speak its name exhibits a strong nationalism.

A key to understanding national identity, and therefore the ideology associated with it, is the Other (see Triandafyllidou 2001 ch.2 for review of literature on ‘National Identity and the Other’).  The mutability, subjective and contextual nature of the Other is evident over time.  The Other can focus on places, people or politics.  Anthony Smith’s observed that nationalism has a ‘chameleon-like ability to transmute itself according to the perceptions and needs of different communities’ (Smith 1995: 3) is in large measure a reflection of the mutable Other.  The potency of the Other may arise from a mixture of the three and the Other can, of course, include the ‘Other within’.  The assumption tends to be that the Other are people:

I am English means I am not French/German/European/…

But this is not an equation nor does it mean that the distinction is with a people.  It does not follow that:

I am French/German/European/… = I am English

In the 1980s what was meant with being Scottish came to have a political content for many people living in Scotland:

I am Scottish = I am not a Tory/Thatcherite.

The Others within have been presented as a particular threat in some nationalist rhetoric.  The Brexit referendum focused to a very large extent on immigration.  But immigration has been framed differently by Scottish nationalists and in Scottish policy debates over many decades, indeed throughout most of the twentieth century.  In part, this may reflect the perceived different demographic challenges.  There has long been concern that Scotland was losing population and, more recently as population levels have stabilised and grown, immigration has been continued to be framed in positive terms.  The SNP has long embraced the Other. 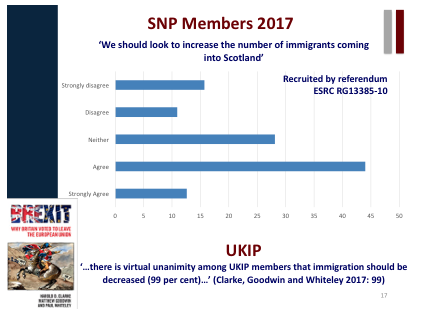 Rhetoric of nationalism: sovereignty and take back control

Nationalism has a common language.  Sovereignty may have limited popular resonance and is more commonly used by the more politically engaged.  The more popular version is ‘take back control’ or ‘Nation First’ (and often enough implicitly ‘Nation First, Last and Always’).

Identity and citizenship as the mirrors of sovereignty

Absolutist notions of sovereignty are mirrored in some cases in the politics of identity and citizenship.  Much is made of identity politics with reference to Brexit, but it is not so much identity per se as the nature of identity politics that requires consideration.  Identities are hollow and the issue is the meaning(s) with which they are filled and relationships between different identities, whether competing or complementary.  The politics of identity in the two referendums held in the UK (Scottish independence in 2014 and EU membership in 2016) illustrate this.  A survey of members of the two parties that advocated Scottish independence found that identity politics did not conform with what might have been expected.  Not only did a proportion acknowledge a British identity but significant numbers identified a European identity.

Note that the survey was conducted at a time when Brexit was growing in importance following the 2015 general election.  We can only speculate but suggest that as identities are contingent and contextual that this manifestation of European identity amongst SNP and Green members owes much to the imminence of the Brexit referendum.  But leaving aside the high levels of Europeanness, the SNP and especially Greens exhibit a sense of Britishness that might not be expected from nationalists.

The relationship between identity and citizenship is far from clear cut.  An identity is subjective while citizenship is fairly clearly defined legally (though can come with surprises).  Nation-building is largely about creating a sense of common identity, hence Connor’s argument that nation-building involved nation destroying.  Over 40 years ago, Aron and Hofstadter argued that the ‘idea of multi-national citizenship is a contradiction in terms’  but the European Union confounded the conflation of identity and citizenship and the notion that a single identity was essential to creating a new polity.  However, this conflation ias abhorrent to purist nationalists.

Congruence of national and political units

This leads to questions of constitutional politics.  For the purist nationalist, a simple equation operates.  National identity and citizenship are singular, sovereignty is absolute and the state shares power with no other entity.  There can be no sharing of sovereignty as sovereignty is absolute.  Citizens can only belong to one state or polity.  Purist nationalism would reject any competition.  There was evidence in the past of a relationship between opponents of devolution in the UK and European integration.  The table below shows the range of constitutional preferences by when members joined the two parties supporting Scottish independence.  The increased membership has resulted in a hardening of support for the Greens’ official position of independence in the EU.

The preferred option amongst members of different cohorts of members of both parties is clearly independence in the EU.  We should also note that the SNP Government’s white paper on independence was an unusual document for a nationalist government given the stress placed o inter-dependence and European integration.

Two referendums to take back control

The 2014 Scottish independence referendum and the 2016 European Union referendum were both about taking back control.  Nationalism, it appears, was the prime motive in each case but that does not take us very far in understanding these phenomena.  Gellner defined nationalist as ‘primarily a political principle which holds that the political and national unit should be congruent’ (Gellner, 1983: 1).  But it is unclear what this means institutionally.  There may be similar motives lying behind these demands but what is being demanded seems to vary significantly.

By comparing the ideologies underpinning the argument for Scottish independence and for leaving the EU, we may tease out the underlying core of nationalism and identify the extent to which nationalism has value as an explanation of these political developments.  What becomes clear is that while a core may be evident and much common rhetoric is employed, the nature of the two nationalisms and their objectives are very different.  It suggests that while nationalism is a useful starting point, it cannot be the end point in any effort to make sense of these recent political developments.  Today, the Conservative Party is emphatically more nationalist than the SNP but some of its leading members still criticize the nationalist mote in the SNP seemingly oblivious to the beam in its own ideology.

Data used in this blog is drawn from the ESRC research project, Recruited by referendum ESRC RG13385-10

Professor James Mitchell is Director of the Academy of Government, University of Edinburgh.

Kellas, James (1991), The Politics of Nationalism and Ethnicity, Basingstoke, Macmillan.

This entry was posted in Uncategorized. Bookmark the permalink.